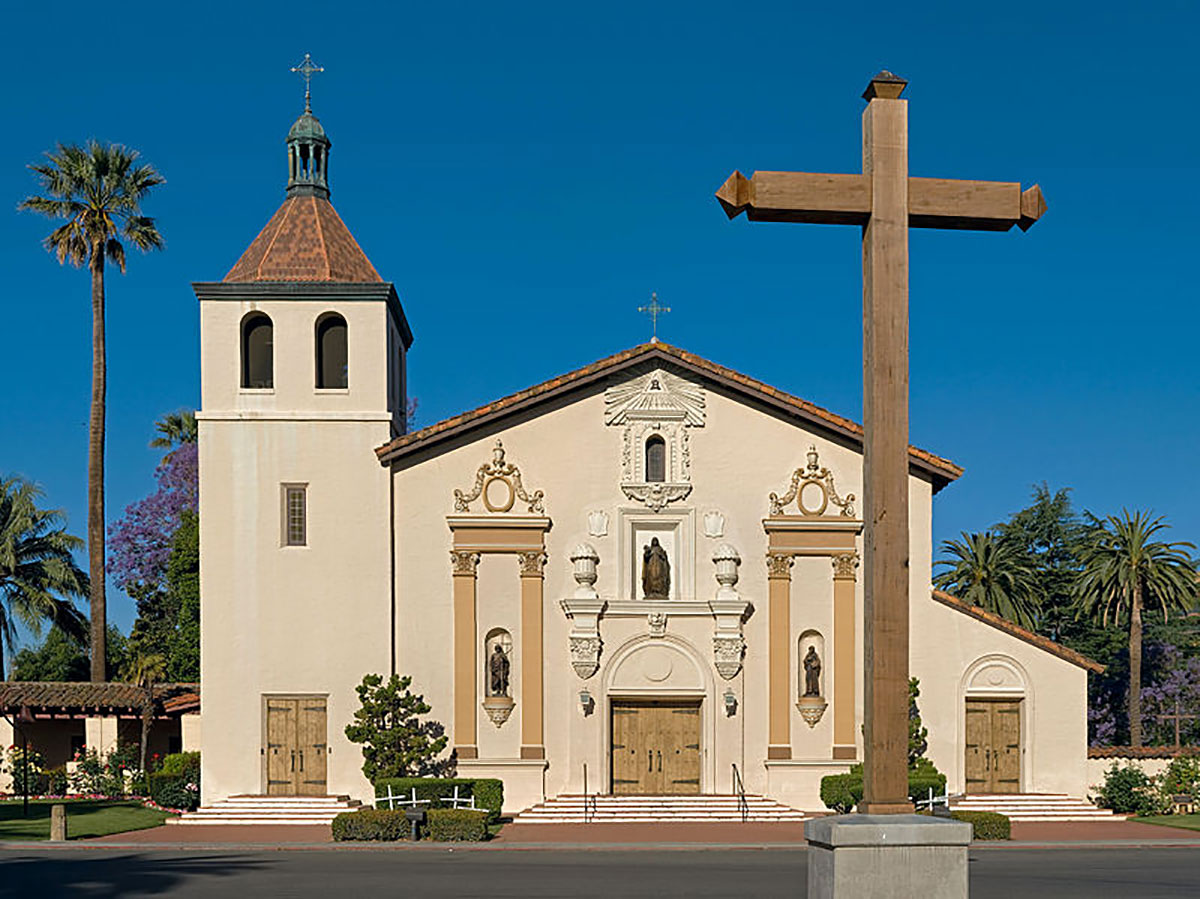 Mission Santa Clara de Asís was the second mission established in the San Francisco Bay area. It was the first California mission to honor a female saint.

With its fertile land and large Indian population, the Bay Area proved an excellent location for the mission, and it quickly became one of the most prosperous in the mission system.

Together with the San Francisco Presidio and Mission Dolores (San Francisco de Asís), the mission created a strong Spanish presence and control of the bay area.

At approximately same time, a civilian pueblo, or settlement, was established at nearby San Jose.  The mission church was used by the people of Pueblo de San Jose until the construction of St. Joseph’s Church in 1803.

Initially, there was friction between the mission and the San Jose community, including disputes over cattle grazing and water rights. Eventually, a four mile road, The Alameda, was built connecting the communities, and leading to better relations. The Alameda is still in use today, a busy multi-lane commuter route.

In 1851, the Jesuit order took possession of the remaining mission buildings, and established a center for higher learning that eventually became Santa Clara University (the oldest university in California).

1846 – Mission returned to the Catholic church.

1851 – Control of the mission is transferred to the Jesuits; it forms the nucleus of Santa Clara University.

Very little remains of previous mission buildings, aside from a few adobe walls. The current church is actually the fifth at Mission Santa Clara!  It was constructed in 1928, modeled on a previous structure built in 1825 (and destroyed by fire). It contains a number of statues and furnishings from earlier eras.  The church was expanded and given a new facade in 1961.

There is a tall cross, erected in 1777, across from the church entrance. Also note the four bells in the companario; one dates to 1798 and was donated by King Carlos IV of Spain. The bells have been rung each evening since 1798 in commemoration of the gift.

The rose garden on the right side of the church was once the mission cemetery.

There is also a large cross and historical marker plaque commemorating the site of the third church; it is located in a small park at the end of Franklin Street, at the Northeast corner of the University grounds.

The Santa Clara University, where the mission church is located,  is a beautiful and historic setting in its own right, and well worth a visit.

The Peralta Adobe & Fallon House are located about 3 miles (10 minute drive) from the University, at 175 West Saint John Street.The Peralta Adobe is the oldest building in San Jose.  It was built in 1797 by Manuel Gonzelez, an Apache Indian.  It is named after Luís María Peralta, it’s second owner, and also the second mayor of San Jose.  Both Gonzelez and Peralta were members of the Juan Bautista de Anza expedition.The nearby Fallon House was built in the 1850s by one of San José’s earliest mayors, Thomas Fallon.  Fallon was a member of the John C. Fremont expedition.  The Victorian mansion features fifteen fully furnished roomsWhen visiting Mission Santa Clara, be sure to visit the many other attractions in Silicon Valley!
Share on Facebook Share
Share on TwitterTweet
Share on Pinterest Share
Share on LinkedIn Share
Share on Digg Share