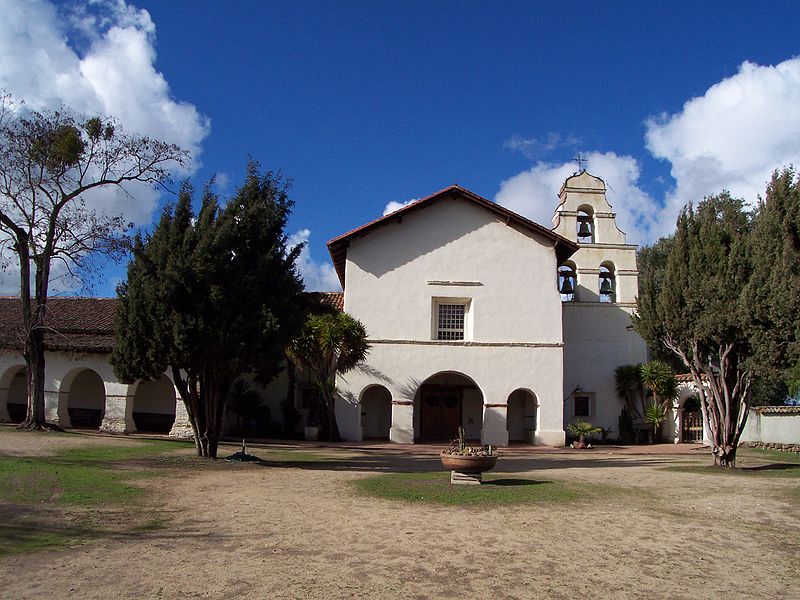 Mission San Juan Bautists. Photograph by Robert A. Estremo, copyright 2004.  License: cc-by-sa-2.0.
San Juan Bautista was the second of five missions built as part of a major expansion of the Alta California mission system. The expansion reduced the distance between missions, and the need for military escorts when travelling between them. In 1812 the current church was completed and dedicated, replacing an earlier adobe chapel built in 1797. The church is the largest in the mission chain; the two side naves are unique. The mission quickly grew and became the core of a prosperous town.  It was widely known for its exceptional choir, and was called the Mission of Music. The mission used a musical notation system developed in Spain where varied colors are used to represent notes; two of the handwritten choir books can be seen in the mission’s museum. The growth of the town was eclipsed by cities like San Jose in 1870, when San Juan Bautista rejected a request from the Southern Pacific Railroad to subsidize the construction of a rail depot.  The rail line therefore bypassed the city, and businesses followed.

The mission is currently in need of extensive renovations to bring the structures up to California Earthquake Codes, and to mitigate water damage.  If you’d like to learn more or contribute to the preservation of this beautiful and historically important mission, please visit savemissionsjb.com

Due to its relatively isolated location, in the small town of San Juan Bautista, much of the mission has been preserved. There is a large adobe church completed in 1812, as well as a beautiful colonnaded walkway along what was once the convento, or priests’ quarters. There is a museum with an extensive collection of artifacts, and a peaceful garden. Inside the church, note the main altar screen and carvings of saints, which date to 1818.  Also look for a series of paintings of the apostles.  These apostelado paintings, purchased in 1820, are the largest collection in the mission system. The mission did not originally have a bell tower.  The two-tiered campanario, with openings for three bells, was added as part of the 1976 restoration of the mission. The mission faces a historic town square that is the last remaining Spanish Plaza. There are a number of surviving buildings from Spanish colonial and early American times, including:

The nearby main street features several galleries, restaurants, and antique stores; many of the dowtown buildings are themselves designated historical landmarks.

The mission also sits adjacent to a small dirt path – an original portion of El Camino Real. The path is 9 feet wide, and there are still ruts from wagon wheels visible in a few places. The mission was used as a setting for the climactic scene in the Alfred Hitchcock classic film Vertigo, released in 1958.  The original mission steeple had been removed in 1949 due to dry rot and termite damage, so Hitchcock “added” a tower using scale models and matte paintings.  The stairway scenes were filmed in the studio.

The Other San Juan Bautista

There was also a Mission San Juan Bautista located in Guerrero, Coahuila, Mexico, as part of the Texas mission system.

San Juan Bautista is one of our favorite missions to visit!

The photos below were taken by the author.