The Royal Road, aka The King’s Highway

El Camino Real – “the Royal Road” – is inextricably linked to the history of California’s missions. The 600-mile trail, stretching from Mission San Diego de Alcalá in San Diego to Mission San Francisco Solano in Sonoma, was created by the Spanish to link the 21 California missions and the associated settlements and presidios. Missions were located approximately 30 miles apart – a long day’s ride on horseback.

The route was a continuation of the Baja California mission trail, and expanded Northward as the Spanish colonized California (or as it was then known, Alta California).

The “royal road” was in fact a modest dirt footpath.  As the mission system grew and traffic increased, the simple trail became a dirt road wide enough to accommodate carts and wagons.

The first portion was not paved until 1912, when a small section in the San Francisco Bay Area became the first paved highway in California.

Technically, any road that came under the jurisdiction of the Spanish viceroys was designated a “Camino Real,” and so today there are roads throughout Mexico and the southwestern United States, including California, Arizona, New Mexico, and Texas, known as El Camino Real.

However, in 1959 the California State Assembly recognized the historic importance of the mission trail, and designated several sections of state highway and connecting roads as the official route of El Camino Real. 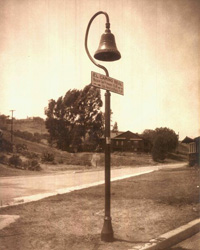 Long before its official recognition, the road was unofficially commemorated by a private group, El Camino Real Association, with a series of bronze bells placed along the route.  The cast bells we suspended from 11-foot high posts designed to resemble a shepherd’s crook. The first of the bells was unveiled August 15, 1906 at the Plaza Church in the Pueblo near Olvera Street in Los Angeles.

Without official support, and only sporadic maintenance, the bells fell in disrepair; many were vandalized or stolen.

The California Mission Walkers are a group of people who have walked (or plan to walk) El Camino Real – the route connecting the 21 California missions.

“The Royal Road” actually referred to many routes that were used for official Spanish government business. Even before California’s El Camino Real was established, there was a route that connected Mexico with missions and presidios in Texas and Louisiana. The trail, El Camino Real de Los Tejas, was designated a National Historic Trail in 2004.