September 23, 2015 – Pope Francis canonized Junipero Serra (declared him a saint), in a mass held before 20,000 people at the Basilica of the National Shrine of the Immaculate Conception in Washington, D.C.  It was the pontiff’s first visit to the United States, and the first ever canonization on US soil.

Sainthood means that the Catholic Church considers the person to be a divine presence in heaven.

Pope John Paul II beatified Serra (made him a candidate for sainthood) in 1988. 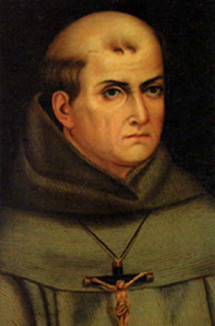 He was born on the Spanish island of Mallorca in 1713 as Miquel Josep Serra Ferrer. He joined the Franciscan order as a young man and took the name “Junipero” in honor of St. Juniper, a companion of St. Francis of Assisi.

He was known for his piety, but was also a tireless explorer and a capable administrator. He was often required to balance the conflicting demands of the church, the military, and civil authorities (including the Spanish governor). Under his leadership, the misisons became self-sufficient, and many grew into thriving settlements – the basis for some of California’s most important cities.

His energetic nature is shown by his personal motto, “Siempre adelante” (always forward).

Serra is often criticized for the abuse of the California Indians, and the destruction of their culture under the mission system. Indians who converted to Catholicism were prevent from leaving the mission, and in some cases were made virtual slaves. They could be beaten or whipped for violating church rules. (The Indians were not singled out in this regard; friars and soldiers faced similar punishments under Spanish rule.)

Serra justified the beating of Indians, treating them as children who needed correction. However, he also fought efforts to enslave Indians, and opposed the colonial governor over treatment of the Indians.

In a little-known historical note, Serra took up collections among his parishes to support the American Revolution, and sent the funds to General George Washington.