Nickname: The Queen of the Missions 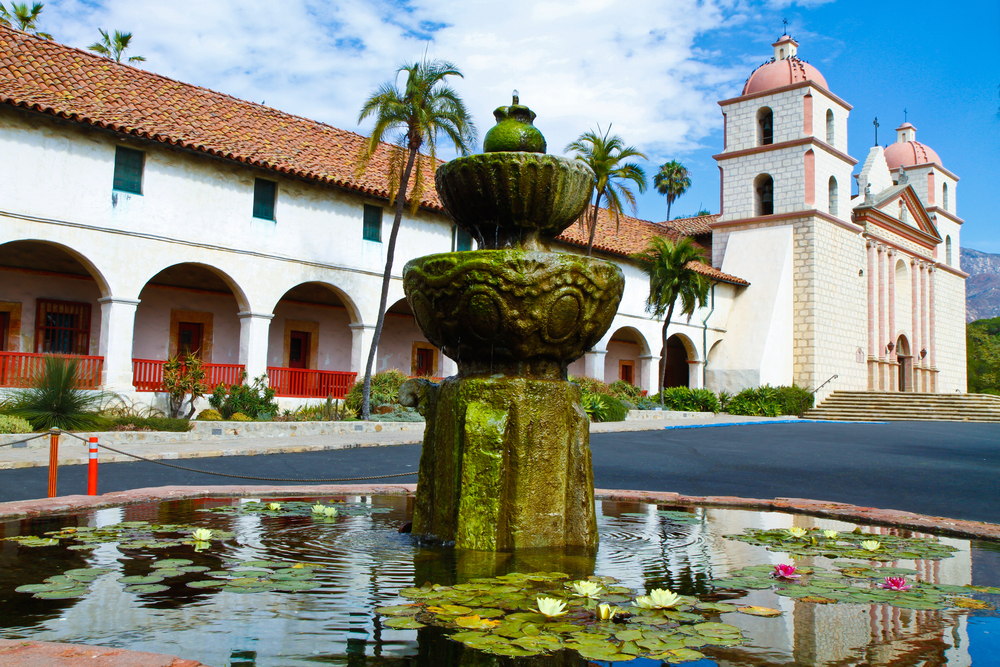 The mission at Santa Barbara was envisioned by Father Junipero Serra as a kind of “bridge” connecting San Luis Obispo de Tolosa and San Gabriel Arcángel. Due to opposition from the governor, who opposed expansion of the mission system, it was not built until after Serra’s death.

The mission was protected by the Santa Barbara Presidio, or military fort, built four years earlier, and together with the missions at San Luis Obispo and San Gabriel, solidified Spanish control over the channel area. The Santa Barbara Presidio was the fourth and final military outpost constructed by the Spanish in Alta California (a fifth Presidio, at Sonoma, was built by the Mexican government after independence from Spain).

In 1818, the Argentine privateer Hippolyte de Bouchard landed a force near the mission and raided surrounding farms, but he withdrew after seeing the strength of the defenses.

The mission church, which occupies a central place in the modern city of Santa Barbara, was damaged several times by earthquakes, but survived and was extended and enhanced. A unique and beautiful neoclassical stone façade was added to the church in 1820. A second tower was added in 1831, but collapsed within two years and was subsequently rebuilt.

Mission Santa Barbara relied on the most extensive water system of any of the missions; many of the aqueducts can still be seen, and the route of the water system is still used by the city’s water company.

La Misión de La Señora Barbara is the only mission that remained under continuous control by the Franciscan order, so records, artwork, and valuables from several of the other missions were transferred to Santa Barbara.

There is a great deal to see at Mission Santa Barbara, including the restored church with its unique façade, an extensive museum and art collection, beautiful gardens, tile fountain, and out-buildings including a mill, tannery, and parts of the original water system.  The unique altar, encrusted with abalone shells, was crafted by Chumash Indians in the 1790s.

The Moorish style fountain in front of the monastery wing was created by Antonio Ramírez in 1808.

The presidio at Santa Barbara was responsible for the defense of the missions at San Fernando, San Buenaventura, Santa Barbara, Santa Inés, and La Purísima.