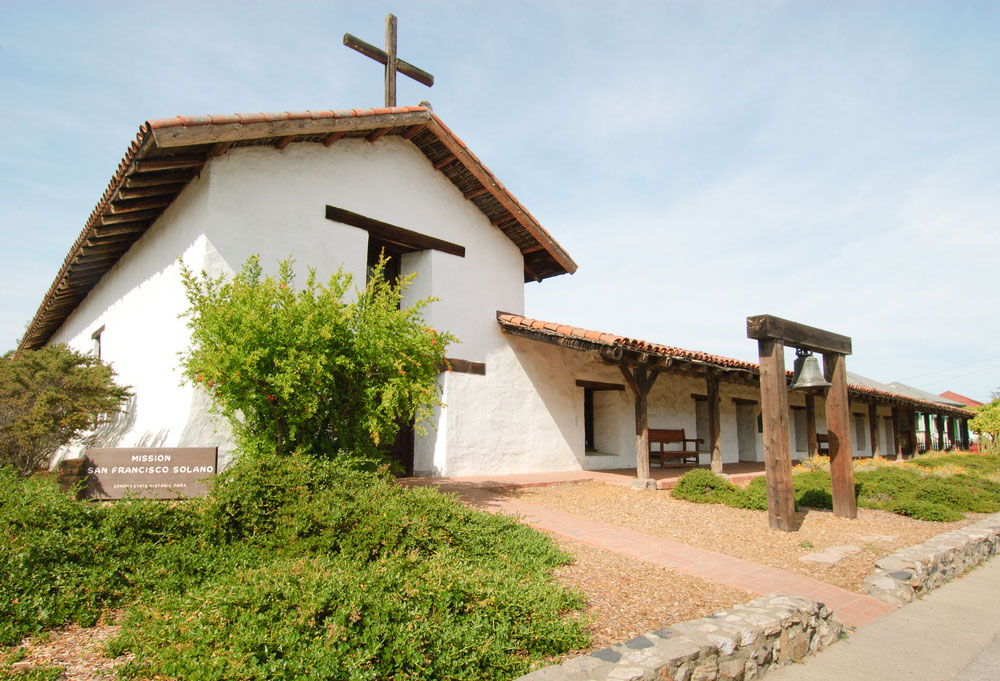 The final California Mission, and the only mission founded after Mexico’s independence from Spain.

Altimira was allowed to proceed with the construction of the mission, but Mission San Francisco de Asís and Mission San Rafael Arcángel continued to operate as well.

All three missions were intended to act as a barrier to Russian expansion in Alta California, and to that end a Presidio, or military fort, was also built at Sonoma. (Since the barracks were built under Mexican rule, and not as part of the Spanish military system, many people dispute whether they can properly be called a Presidio.)

However, the feared military conflict never occurred. In fact, as the community at Sonoma grew, the padres and settlers regularly traded with the Russians at Fort Ross.

In later years, Sonoma was the site of the Bear Flag Revolt, which declared Alta California independent from Mexico.

1911 – A replica of the original mission church is built.

The mission is adjacent to a Mexican-style town square, the largest in California, which is still the heart of downtown Sonoma.

Visitors can see a 1913 reconstruction of the mission’s adobe chapel, as well as the nearby Presidio.  The original padres’ quarters now house a museum.

Visitors can see the barracks and outbuildings of the presidio, now operated as a museum by the State of California.

In additional to the excellent museum, there are several other historic buildings nearby, including Captain Salvador Vallejo‘s Casa Grande, the Blue Wing Inn, the Sebastiani Theatre, and the Toscano Hotel.

Together the many attractions make Sonoma a must-see for anyone interested in California history.

Just a few miles from the mission itself, visitors will find the California Missions Museum (at Cline Cellars).

The museum houses a collection of detailed models of each of the 21 missions, originally constructed for the 1939 World’s Fair. There is also a life-size figure of Father Junipero Serra, mission paintings by artists Robert Morris and Henry Nelson, and two stained-glass panels originally housed in Mission San Francisco de Asîs (prior to the 1906 San Francisco earthquake).

Ready for a Drive?

Mission San Francisco de Solano is the northernmost of the California missions, but if you’re ready for a drive, we recommend two other fascinating places to visit: