Many of the California Missions had extensions, or sub-missions (asistencias), or ranchos (estancias), created to extend the reach of the missions and serve a larger community.

Known asistencias, in order of their construction, include:

It supplied much of the food for the mission and the presidio (El Presidio Real de San Francisco).  It also served as a base of operations for priests ministering to the nearby Ohlone. Over 150 native people were baptized at the asistencia.

The mission buildings are gone, but logs have been placed on the grounds to indicate their general outline.

Location: Rancho Santa Margarita, CA (not open to the public)

Some of the foundations and walls of the original structures have been incorporated into a barn and ranch house that are still in use today. 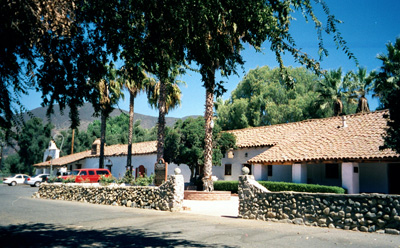 San Antonio de Pala, along with Las Flores (below), was a sub-mission of Mission San Luis Rey de Francia.

The Pala Asistencia is still in use as an active Catholic church, serving the nearby Pala Indian Reservation.  It is the only mission-era asistencia that is still in use.

When visiting, be sure to see the chapel, which has been fully restored.  The wooden crucifix was hand-carved in Mexico in the 17th century!  Also note the original cemetery, which contains the graves of mission neophytes. 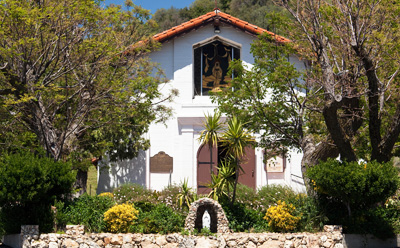 There is nothing left of the original asistencia. The current chapel, shown above, was constructed in 1924. There is also a small historical museum on the site. 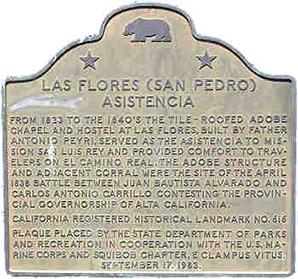 Location: Camp Pendleton Marine Base, CA (not open to the public)

Las Flores consisted of a tile roofed adobe, a chapel, a hostel, and ranch buildings. All that remains are crumbling adobe bricks.

From 1823 to the 1840’s the tile-roofed adobe chapel and hostel at Las Flores, built by Father Antonio Peyri, served as the asistencia to Mission San Luis Rey and provided comfort to travelers on El Camino Real. The adobe structure and adjacent corral were the site of the April 1838 battle between Juan Bautista Alvarado and Carlos Antonio Carrillo contesting the provincial governorship of Alta California. 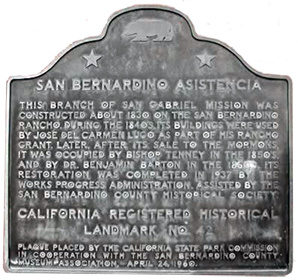 The current structure on the site is a reconstruction, based on San Antonio de Pala Asistencia. There is also a small museum.

This branch of San Gabriel Mission was constructed about 1830 on the San Bernardino Rancho. During the 1840s, its buildings were used by José del Carmen Lugo as part of his rancho grant. Later, after its sale to the Mormons, it was occupied by Bishop Tenney in the 1850s, and by Dr. Benjamin Barton in the 1860s. Its restoration was completed in 1937 by the Works Progress Administration, assisted by the San Bernardino County Historical Society.